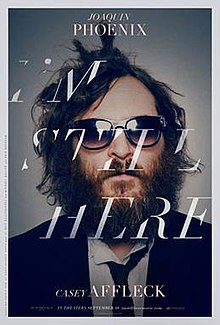 We were looking for movies to watch last week, and when we saw I’m Still Here for free on Amazon for Prime members, we decided to check it out.  I’d done no investigation about this movie before watching it, so I was a bit shocked by what I saw.

I’m Still Here is supposed to be a documentary about Joaquin Phoenix’s retirement from acting to pursue a hip hop career.  The movie was filmed and created by his brother-in-law, Casey Affleck.

I wanted to see this movie because I enjoy Joaquin Phoenix’s performances, especially in Walk the Line and The Village.  I think he’s a gifted actor, and I always wondered how witnessing his brother’s death must have affected him.

I definitely wouldn’t recommend this movie to everyone, especially if you’re put off by nudity, profanity, drug use, and prostitution.  If the film truly captured Joaquin Phoenix’s life during that time, I’d say he’s troubled, maybe very troubled.

But the problem is, I don’t think this film is a true reflection of his life.  Why would his brother-in-law put out a film that would portray Joaquin in such a bad light?  It’s not exactly good for family relations.

Ultimately I think this film is a fake.  I think Phoenix was doing what he does best, acting.  Perhaps he put himself in an unflattering light to show what he truly thinks of the world of  show business.  Maybe he wants to show how troubling life can be for big name film actors who have millions but must face paparazzi constantly as well as a world of critics.

I thought about this film long after it was over, but mostly it was to determine if it was all fake or not.  Like reality shows and films, I think this “documentary” is nothing more than a work of fiction.

Have you see I’m Still Here?  What did you think of it?

This site uses Akismet to reduce spam. Learn how your comment data is processed.

Welcome to Mom’s Plans! I'm a homeschooling, crunchy mom to three kids, ages 16, 12 and 10. We're living a satisfying life on one income, eating as naturally as possible, and homeschooling in a gentle, fun manner. Read More…

Mom's Plans is a participant in the Amazon Services LLC Associates Program, an affiliate advertising program designed to provide a means for sites to earn advertising fees by advertising and linking to Amazon.com.